The Ananda temple has a cruciform ground plan, with four entrance halls in the north, south, east, and west ends. It's square-shaped base measures 200 feet on each side. Terraces tower above the center to a decorative height of 168 feet. The gilded Htee (umbrella) crown and complete the edifice.

Numerous glazed tiles ornament the base and the receding terraces. These tiles depict the Jataka stories and the Mara's army in Mon lettering.

The centre of the temple enshrines four huge standing statues of Buddha, who have emerged from past and present eras: Kakusanda in the North, Konagamana in the East, Kassapa in the South, and Gautama in the West. The statues on the north and south sides are the original ones dating back to the foundation of the temple, but the statues on the east and west were built in later eras after the originals were destroyed by fires.

The interior consists of two corridors. The inner walls are honey-combed with niches containing small stone Buddhas in various postures. The most notable sculptures are series of eighty reliefs in the outer corridor, illustrating the life of the Buddha from his birth to the attainment of enlightenment at Bodh Gaya.

The western hall also enshrines two life-size figures. These figures are believed to be King Kyanzittha, the founder of Ananda Temple, and the venerable Shin Arahan. The Buddha's footprints are placed in the western hall. Each footprint bears the traditional 108 marks as enumerated in some of the Pali commentaries, but due to wear and tear, some of these marks have disappeared and cannot be properly identified. 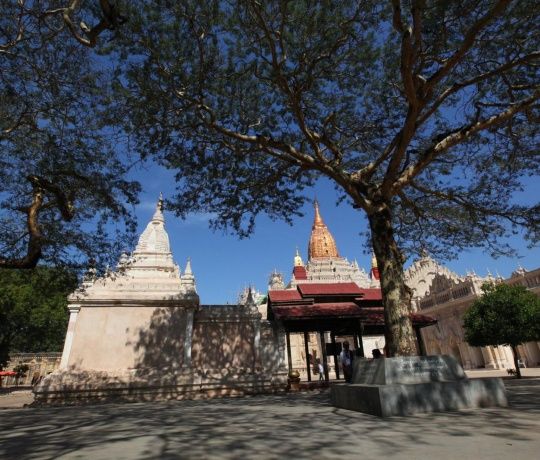 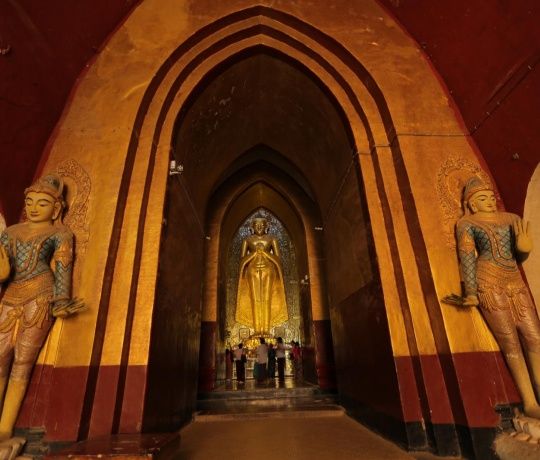 The Ananda temple is the one of most revered monuments in Bagan, together with the Shwezigon pagoda at Nyaung U. According to chronicles, Ananda temple was built by King Kyanzittha in the early Bagan period, but its exact foundation date is uncertain.

The Ananda was maintained continuously after the fall of Bagan by many patrons. 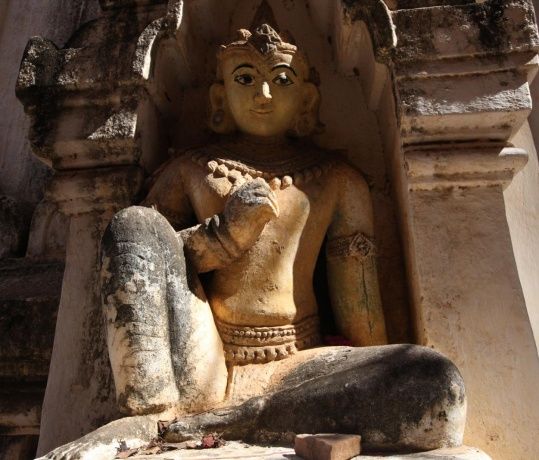 The architectural wonder of the temple is the natural ventilation system by means of windows built inside the thickness of the walls. 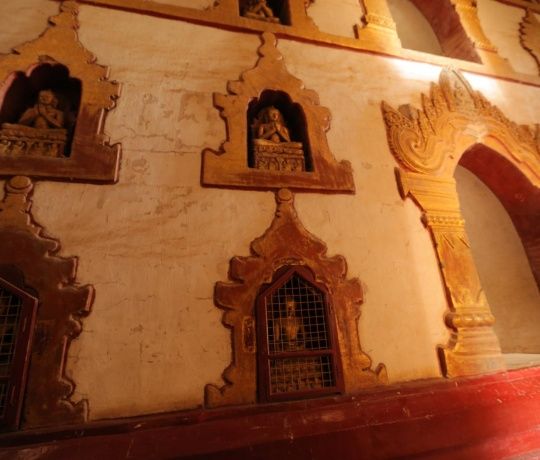 The arch span was formed by laying the baked bricks in a radiating pattern and placing stone bricks as wedges between them.

Ananda temple festival is annually held around January. The highlights of the festival are evening entertainment performances and a fair where local and traditional products are available.